Hopeful or hopeless, you decide.

I’m in Shenandoah National Park. I’ve decided to take a loop hike; 7.7 miles, 2313 elevation change, with the last leg of 3.1 miles along the Appalachian Trail. The last leg is relatively flat, the starting legs are not. It is down to Doyle River Falls and then keep going and loop back up the next canyon to Jones Run Falls and then back to the top where the Appalachian trail will take me back to my car.

As I’ve mentioned before, this part of the country has been having a bit of a dry spell. The water isn’t flowing much which make the falls not up to their potential. Further, I still haven’t caught up with the fall weather, yet this country is pretty spectacular.

Two incidents made for a very memorable hike. As I got to the bottom of Doyles and was about to turn up to Jones Run I saw a bear, just a black one. He was startled and took off before I could snap a picture. What I quickly discovered is he made the turn and was heading up the stream to Jones Run Falls. These canyons are narrow and steep so he was ahead of me and since the trail ran right beside the stream I couldn’t pass him.

So, what would you have done? I was again without buds, bells or bear spray. Of course I took out my camera and followed him. 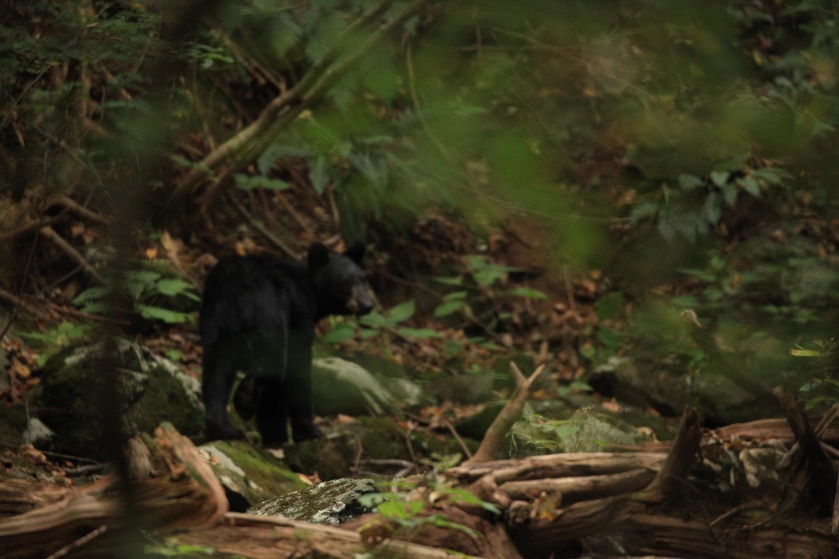 He kept looking back at me, I’d stop. It was also interesting to hear the echoing down the canyon as he was turning over rocks, sometimes big ones, in the stream. At one point he came up on the trail and I couldn’t tell if he meant to keep going up or come back down, towards me. So, I picked up a big stick and whacked it on a rock. Yes, big scary me. The stick broke. He turned uptrail and I let him get ahead of me. I could tell he was back in the stream by the rock echos. Walking slowly and not hearing him for awhile I came upon another hiker coming down the trail with his dog. I asked if he had seen the bear and he said yes, saying it had left the stream and gone up the side of the canyon.

So, it was back to full steam ahead, up, up, up. Shortly I encountered a lady coming down the trail. We exchanged good mornings (as most hikers are friendly) and she stopped me with a question on how the falls were. I admitted there were better times to be viewing them and asked if she was from around here, nope just visiting. I then mentioned I had just seen a bear upon which I could see conflict pass across her face. She sorta wanted to see one but sorta didn’t. Anyway, wishing her a good hike I headed up and she headed down. About 2 hours later, while on the Appalachian Trail part and heading back to my car, I see her again. Remember, this was a loop hike and obviously she was up to doing it also, just in the opposite direction. I greeted he again and told he I was wondering where she was visiting from. Oklahoma, here on a business conference. She had a camera around her neck that I asked if it was film, because of the retro look. No, it was a new mirrorless that she liked because of the analog controls. I mentioned I also took photos and she stepped closer as I pulled out my camera from my fanny pack. “Oh, that’s a big one.” I swear, that’s what she said. I mumbled something about how I had arrived at this rig but I should have said, with a smile, “hmmm, think I’m compensating for something?”. I showed her a picture of the bear she had just missed. And then we parted. Shortly I had the thought that what I should have done is asked her if I found myself passing through her town, could I stop by and she show me the pictures she took today. I would then give her my contact info (including this blog site) and ask her to contact me if she was so inclined. Then we would have parted.

This spring I was able to recover some slides I took from a long time ago, like 40 years. Yesterday I stopped in at a friends house to digitize a few of them. He, unlike myself, is a computer nerd and has all of those kind of toys. Enjoy. 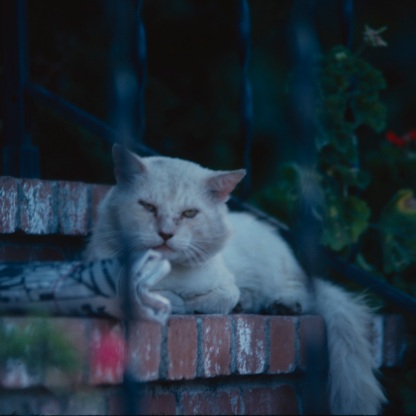 I got out for a little hiking on Mt. Rainier. Weather and animals cooperated. 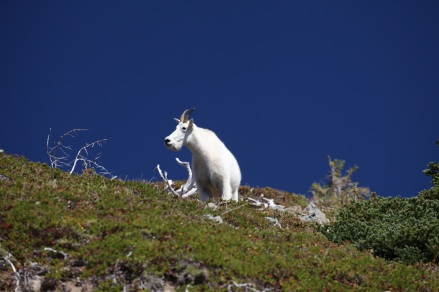 Of course I made it home. It was a very enjoyable drive. I really liked Astoria. It’s a very, very, very small San Francisco, which makes it quaint.

Here are a few more pictures. The Sea Lions and Bald Eagle were in the Astoria Harbor. The water is the Columbia. And the big mountain is Mt Hood. Always a good day when you can see Mt Hood. 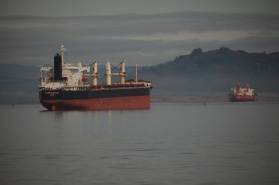 Progress is being made on the big adventure, however there is a delay. I can be of value helping my brother move, so I am. Also, I have a Black Belt review coming up at the beginning of March. It is a two day affair. I’m thinking I need to put in some serious preparation time. Good thing I’m retired. Besides working hard I’m going to squeeze in more and longer trips to the studio in Salt Lake City.

Speaking of which, I just ran down there for a couple of days of lessons. I used the opportunity to finally, actually sign up with Airbnb. Then I looked for places. What choices. I chose a place to try to maximize the chance of an adventure, a goat farm. Here are some pictures and the entry I left in the guest book.

With homage to Harry Chapin’s “Mr Tanner” I present my work.

What happens when an older guy starts:

on-line dating, writing poetry, taking photos, dumping all his stuff, jumps in his car and starts Airbnb’ing across the country for a year?

I don’t know, but we are going to find out.